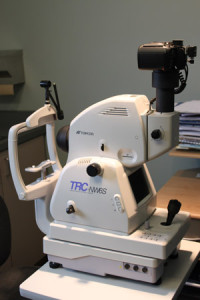 An important service provided at our office is retinal photography. We recommend having these images taken on your initial visit to establish baseline health. They are especially important for diabetics, individuals with a family history of glaucoma or macular degeneration, or when any other pathology is present. 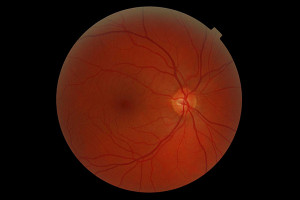 This is a normal-looking retina. The retina is the light-sensitive layer on the inner surface of the eye that contains rods and cones. The disc to the right of the image is the optic nerve, which carries information from the retina to the brain. The darker spot in the centre of the photo is the macula, an area responsible for fine, central vision. The slightly thicker blood vessels are veins and the thinner ones with pale centres are arteries. 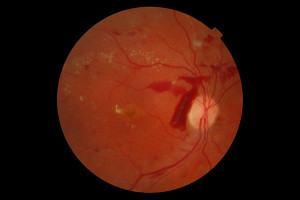 This is the retina of a diabetic with numerous hemorrhages, as well as hard exudates (the white spots) inside the eye. 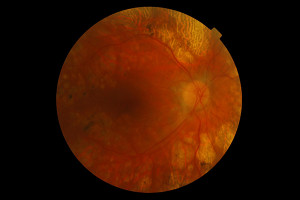 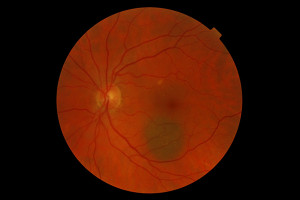 The darker, grey spot in the lower half of the photo is a type of freckle called a Choroidal Nevus. It is fairly common, almost always benign and simply requires monitoring. 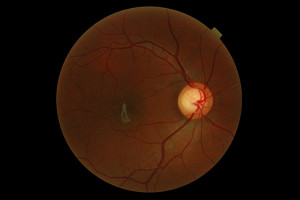 The large depression, or “cup,” at the centre of this patient’s optic nerve makes him a suspect for glaucoma. This patient also has some condensed jelly (i.e. vitreous) just above his macula (keyhole-shaped white opacity in the centre). 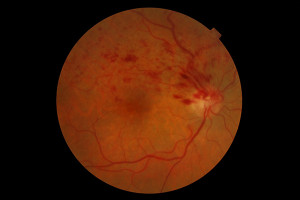 A vein travelling into the optic nerve has been occluded, causing multiple hemorrhages. This patient’s high blood pressure contributed to this problem. 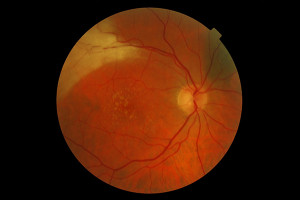 This patient has three interesting issues. In the top left corner, a patch of nerve fibres is covered in myelin, a protective sheath usually not found on the retina. It is completely harmless. There is also a freckle (i.e. nevus) in the top right corner and some early macular degeneration centrally. 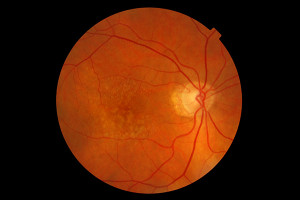 This patient has early dry macular degeneration in the right eye. The yellowish spots in the centre of the photo are fatty deposits called Drusen. Initially, they do not affect vision and are often discovered during routine eye exams. 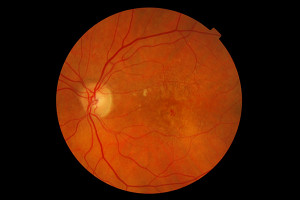 This is the previous patient’s left eye. Notice the small bleed at the centre of the macula. The dry macular degeneration has progressed to the wet form. This patient was sent to a retinal specialist for an injection of medication to stop the bleeding. 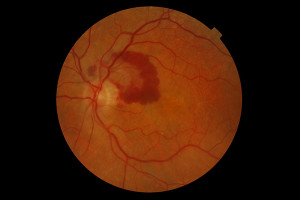 This patient was experiencing some distortion in vision. She had a retinal bleed and was sent to a specialist who gave her an injection of medication to stop the bleeding. 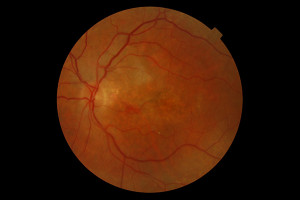 This is the post-treatment image of the previous patient with a retinal bleed, taken a few months after. 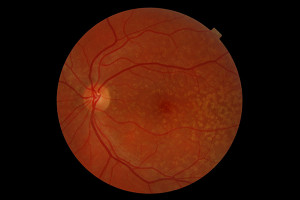 The numerous deposits seen in this patient’s eye are called Drusen. They typically are found centrally at the macula in elderly people, but this patient is in her early 40s. This hereditary condition, unlike macular degeneration, tends to progress slowly with less vision loss. This patient still sees 20/20.

This image was taken after radiation therapy at Princess Margaret Hospital for a cancerous tumour inside the eye. Unfortunately, the sight in this eye has been lost. 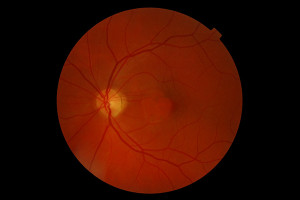 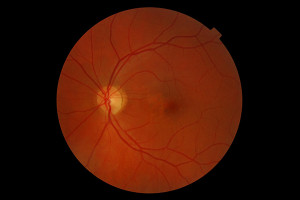 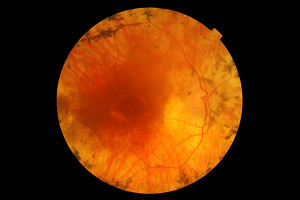 This patient has advanced Retinitis Pigmentosa, a disease that causes progressive night blindness and tunnel vision. It can eventually damage central vision. It is usually diagnosed in the teenage years. 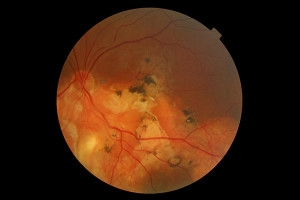 A hockey injury caused this large retinal detachment and extensive scarring. This patient has no central vision or superior vision, but still retains peripheral vision inferiorly. 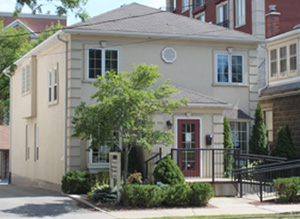